Visual disturbances common in adults, the elderly and children

Below we list the most frequent vision problems in the Italian population. Defects of refraction, or defects of focus: myopia, farsightedness, astigmatism and presbyopia. In these disorders there are defects in one or more of the structures that allow objects to be focused: the lens (ocular lens), the shape of the eye and the cornea (anterior membrane of the eye).

These disorders generally occur at a young age and can be corrected through the use of lenses or surgery.

Presbyopia (difficulty in focusing on nearby objects due to hardening of the lens), on the other hand, emerges with age, usually after 40 years of age. Another less common refractive defect is aphakia, in which the lens is absent: it derives from congenital malformations or operations to remove this structure.

In addition to manifesting difficulties in vision, refractive defects can cause symptoms such as headaches and burning eyes;Sty. An infection of the eyelid, in particular of the sebaceous glands (which produce sebum, a substance useful for the skin) found there. It appears as a red, sometimes purulent swelling of the eyelid.

It generally resolves spontaneously, but sometimes it is also accompanied by other problems (such as allergic rhinitis), so consulting with a doctor is recommended;
Conjunctivitis. It is the inflammation of the transparent membrane that covers the eye.

It can result from infections, allergies, or contact with substances such as smoke or chlorine.

Symptoms include burning, tearing, the emission of liquids that encrust the eye and the painful sensation of having something in the eye;

This is inflammation of the uveal tract (a membrane in the eye that includes the iris). 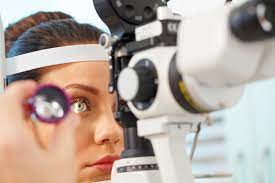 It can be due to many causes, including more or less widespread infections in the body, trauma or an autoimmune disease (i.e. a disease in which the immune system recognizes a part of the body as harmful by attacking it).

Retinal degerations. It is a series of inherited pathologies that involve a dysfunction of the retina, gradually compromising vision. Some may involve detachment of the retina. The most common form of these diseases is retinitis pigmentosa, which initially leads to night blindness, color blindness (inability to distinguish some colors) or loss of central vision;