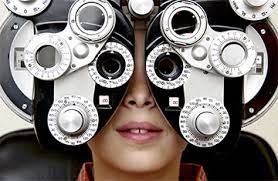 Detachment of the retina. Normally the retina adheres to the back of the eye. In detachment the retina goes limp, so that the person shows a reduction in vision. Symptoms include seeing a shadow in the field of view, called a “curtain,” and flashes of light or dark-colored lines in motion.

The earlier the disease is identified the easier and more effective the recovery will be; otherwise the person will lose sight of all or part;Ocular tumors.

They are not very common.

They generally occur in people with light eyes and in those who are very exposed to ultraviolet rays and / or X rays.

The most common, which affects about 450 people a year, is uveal melanoma (that is, it affects the uvea, a membrane present in the eye consisting of the iris, ciliary body and choroid).

Diabetic retinopathy is a common complication of diabetes, which involves damage to the blood vessels of the retina. It is progressive: it shows 4 stages in which sight is gradually lost. It can be kept under control and prevented by monitoring certain physiological parameters and a specific diet.

Early diagnosis reduces the risk of blindness;
Keratoconus. It is a progressive distortion of the cornea that leads to degenerative astigmatism. It occurs between 10 and 25 years of age with a deterioration of vision that increases more and more, requiring a frequent change of glasses.

Infographic showing the deformation of the cornea with keratoconus

Visual disturbances common in the elderly

The people most affected by the diseases that cause low vision and blindness are the elderly, also due to the lengthening of the average life span, with serious impairment of individual autonomy. In addition, elderly visually impaired individuals often suffer from depression.

The most common pathologies in the elderly are:

However, it can also occur earlier, as it can result from trauma, inflammatory eye diseases, exposure to X or ultraviolet rays, diseases such as diabetes, malnutrition and the use of smoking or alcohol;